Aisha Mohammed grew up in South East London, in the community where the play is set. She is a poet, performer and multi-disciplinary fine artist, working around and with multiple mediums, painting, drawing, sculptor, photography, print, creative writing and digital art. The Crows Plucked Your Sinews will be her theatrical debut.

Aisha is currently studying a BA FINE ART at University of the Arts London. She is a resident artist at Numbi Arts – a collaborative cross-cultural exchange for artists that draws from the experience of Somali communities around the world.

Hassan Mahamdallie trained in theatre and spent many years working as a theatre actor, deviser and director, mainly in the north west of England. He then made his name as an investigative journalist, columnist, writer and lecturer particularly in the area of black and Asian struggles against injustice and civil rights. He has contributed to many books and   is the author of a biography of radical artist William Morris – ‘Crossing the River of Fire’ and editor of the collection of essays ‘Defending Multiculturalism’. He also blogs for the dreamdeferred site on his teenage years as a south London punk rocker. He is presently Director of the Muslim Institute, a free-thinking Muslim organisation based in London and is a deputy editor of the institute’s new quarterly publication ‘Critical Muslim’.

riter and multi-instrumentalist. He comes from Khemis Miliana in Algeria, a few miles away from Wahran, the birth place of raï . He started to play raï music in his home country. An accomplished singer and musician, he now based in Greenwich, south east London, where he teaches young musicians. He is a charismatic performer and has performed at major festivals within the UK, including the Womad main stage, as well and internationally. http://www.saadoun.com/

Rachel Gadsden is a unique visual and performance artist working across the mainstream and disability art sectors, presenting cross-cultural visual dialogues that consider the most profound notions of what it is to be human. She was awarded the National Diversity Award 2013: Positive Role Model for Disability, shortlisted for the European Diversity Awards 2014  – Hero of the Year and was awarded BreakThrough UK Award 2014 – Influencing disabled people’s participation in society.  www.rachelgadsden.com

Adam Radolinski Polish born, multi-disciplinary visual artist, theatre/film director, Adam grew up in an artistic family with his father, Stanislaw, a sculptor, having great impact on Adam’s work. In 2012, he graduated in Photography (Polish National Cultural Centre). He has exhibited in Poland, Ireland, Italy, Russia and Dubai. In 2009, like a Polish Radio and Newspaper correspondent, he started his journey through the Middle East, visiting Iran, Iraq, turkey, Syria, Lebanon, Palestine, Israel and Jordan. He lives and works in Dubai.

Ayaan Aden was born and raised in Mogadishu, Somalia, and was educated in Somalia, Kenya and the UK. Ayaan was a founder member of Bexley Somali Community Association in south east London, and has been active in the community for many years. She is presently training to be a language teacher.

Ayaan is a skilled linguist, interpreter and translator and is steeped in Somali history, language, tradition, social structure, culture and the arts. She introduced ‘Crows’ writer Hassan Mahamdallie to the historical figure of Mohammed ‘Abdille Hassan and his epic poetry, including Koofil. She has advised on The Crows Plucked Your Sinews since its inception.

Jamil Dhillon has a BA in Directing, Drama Centre, London, has worked at Graeae Theatre and Theatre Centre and previously starred in the BBC sitcom All About Me with Jasper Carrot and Meera Syal. Jamil has been involved in music video production, assisting on EMI’s Last of English Roses music video (Pete Doherty (The Libertines). He studied ‘Electronic Music Production’ at SAE Institute, London and reviews music for online arts publication ‘Zero Magazine.’

London, United Kingdom – Tuesday 19 November 2013 – Final rehearsal of ‘The Crows Plucked Your Sinews’ at the Bush Theatre. Performed by Yusra Warsama. With the legendary Hudaidi on Oud.

Written and directed by Hassan Mahamdallie

Oud and percussion by Abdelkader Saadoun

Waad mahadsantahey to Madani Younis and all at the Bush for helping to develop this play. 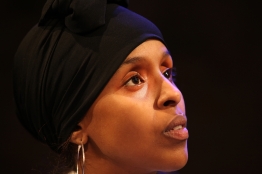